The UK welcomes the world's top athletes at the 2012 Summer Olympics! 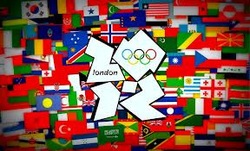 Team Canada at the 2012 Summer Olympics! 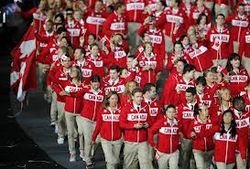 Canadian athletes to watch on the track at the 2012 Summer Olympics! 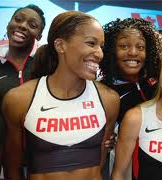 Photo: Members of the Canadian Track and Field team (left to right) Kerri Ann Mitchell (100m), Phylicia George (100m Hurdles), Nikkita Holder (100m Hurdles).
Crystal Emmanuel (200m), who is not in this photo is also one to watch in the women's competitions. 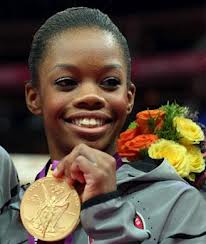 Gabrielle "Gabby" Douglas has made history at the 2012 London Games by becoming the second black female gymnast to capture an Olympic gold medal. Douglass and the U.S. women’s gymnastics team won the gold medal on July 31 and it marked the first gold medal for the U.S. team since 1996 in Atlanta. Douglas, along with Jordyn Wieber, Aly Raisman, McKayla Maroney and Kyla Ross, known as the ‘Fab Five,’ defeated the Russian team who won silver and the Romanian team who won bronze.
Douglas scored a 15.966 on the vault, 15.200 on the uneven bars, a 15.233 on the balance beam and a 15.066 on the floor exercise. On August 2nd, 16-year-old Gabby Douglas from Virginia became the first African-American to win the women's all-around Olympic title in gymnastics. Douglas led from the start, finishing with 62.232 points.
The other black female gymnast to win gold at the Olympics is motivational speaker and healthy living advocate Dominique Dawes. Born November 20, 1976, in Silver Spring, Maryland, Dominique competed in three Olympics and was a member of three Olympic medal-winning teams: Barcelona 1992 (bronze), Atlanta 1996 (gold), and Sydney 2000 (bronze).  Dawes was inducted into the International Gymnastics Hall of Fame in 2009. 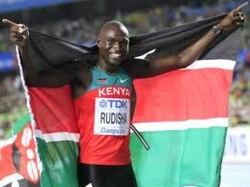 Kenya is one of Africa's most successful sporting nations in the world and their Olympic squad comprises almost 80 members including over 30 track and field athletes. They've also got swimmers (including Jason Dunford, flagbearer at the July 27th opening ceremony), a rower, boxers and a Taekwondo competitor. Kenya is expected to win several medals especially in the long distance running races. The marathon should yield several medals, both Wilson Kipsang and Mary Keitany swept the London marathon in April, so the athletes are well prepared. Other athletes to watch out for are: Robert Cheruiyot (long
distance/marathon); Pamela Jelimo a young female 800m runner who has won almost every one of her races this summer; Ezekiel Kembo, Brimin Kipruto and Abel Kiprop Mutai, who all specialize in the steeplechase; Edwin Cheruiyot Soi in the
5,000m, David Rudisha and Wilfred Bungei who run the men's 800m. Siblings Linet and Moses Masai are both aiming for gold medals in the middle distances. Kenya first participated at the Olympic Games in 1956, and has sent athletes to compete in every Summer Olympic Games since then, except for the boycotted 1976
and 1980 Games.