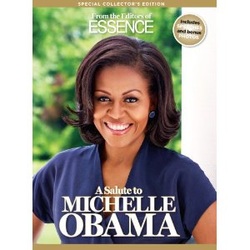 Through her commitment to her family and community, professional pursuits and personal passions, First Lady Michelle Obama is redefining possibilities and opportunities for women in this century. ESSENCE has chronicled Mrs. Obama before she ventured into the national spotlight. Now, in First Lady Michelle Obama, ESSENCE editors recapture those early moments and illuminate her current role as First Lady today in a special commemorative book that charts one of the most incredible personal journeys in American history.

A Salute to Michelle Obama document Mrs. Obama's life from the South Side of Chicago to 1600 Pennsylvania Avenue. This lavishly illustrated title will explore the social, cultural, and political impact of the First Lady's education, health, and military family initiatives; her national and international causes and campaigns, and her broad fashion sense that connects with both Seventh Avenue and Main Street.

Like the best-sellers The Obamas in the White House: Reflections on Family, Faith and Leadership, and The Obamas: Portrait of American's New First Family, the new book from ESSENCE editors, will combine stunning images of the First Lady in and out of the White House, with the President and her family, along with memorable quotes she's provided exclusively to the magazine and from her most popular speeches and addresses.

This is an ideal holiday treasure about a truly remarkable American woman and one of the most admired people in the world.

50 Years of Impact: A Biographical Dictionary of Canadians of Cameroonian Origin 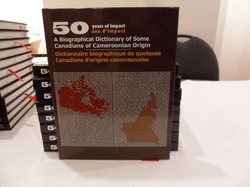 This bilingual (English/French) biographical dictionary is based on the premise that thanks to their education in Cameroon, Canada and elsewhere as well as their drive and ambition, thousands of Canadians of Cameroonian origin are contributing to building a strong and vibrant Canadian society not just through participation in the Canadian economy but especially through their involvement in a wide range of social and community pursuits that are helping to enrich everyday life in Canada. It was commissioned as part of the commemoration of the fiftieth anniversary of the establishment of diplomatic relations between Canada and Cameroon.

Compiled and edited by a a three-person editorial committee consisting of Paul Takha Ayah (Editor-in-Chief and a former president of the Association of Cameroonians in Canada), Dr Lilian Ndangam-Fokwang (Toronto ) and Dr Aurelie Takam Taguemné (Winnipeg), this volume contains about 300 entries from across Canada. The 272 individuals featured in this biographical dictionary are meant to serve as standard bearers for the entire Cameroonian community in Canada.  Their biographies paint a picture of a dynamic, resilient, diverse and
well-integrated community. Apart from professionals such as bankers, translators, engineers and physicians, this dictionary features remarkable Cameroonian-Canadians such as a former WBC world boxing champion, an international volleyball referee, a professional soccer player who was a prolific attacker for the Canadian
National Team, a provincial cabinet minister, an entrepreneur with several registered patents, a captain in the Royal Canadian Air Force and a priest who had a street named after him in recognition of his good works in the
community.

In addition to their presence in large numbers in provincial and territorial governments, members of the community are represented in equally large numbers in the Canadian civil service, in governmental agencies, in the private sector and in tenure-track positions in over 20 Canadian universities.

To order this book, visit: www.50yearsofimpact.com or contact its editor-in-chief, Paul Takha Ayah at paulayah@hotmail.com 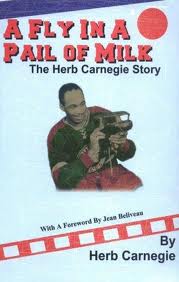 "Fly in a Pail of Milk" is the autobiography of Herb Carnegie, the 3-time,
Senior League MVP and career minor leaguer, who should have broken the NHL color
barrier 20 years before Boston Bruin Willie O'Ree. Despite being referred to as
"the best that never played," the Ontario native never realized his dream of
playing in the NHL for his beloved Toronto Maple Leafs, most said, because of
the color of his skin. Though the pacing, at times, is a bit slow, the book is a
worthwhile read, primarily because Carnegie is rarely mentioned in hockey
history books, and few of even the most versed hockey fans could tell you who he is. 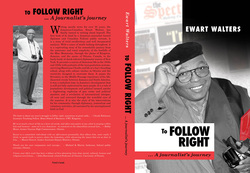 To Follow Right – a Journalist’s Journey, By Ewart Walters

Writing mostly news for over 50 years, Ewart Walters has finally turned to writing about himself. The first book of its kind by a Jamaican journalist turned diplomat and Canadian Federal public servant, it is a story of deep revelations about powerful interests, and well documented analysis. With tickling tales and moving moments, it is a captivating story of his remarkable journey from the rural innocence of the foothills of the Blue Mountains, through the plains of Kingston, Jamaica, and the snows of Ottawa, Canada, to the hurly-burly of shark-infested diplomatic waters of New York. It is a canvas of Jamaican life in the 1940s and 1950s with portraits of the transportation systems, surviving Hurricane Charlie, and life at a boy’s boarding school along with culture clashes in Ottawa and the creativity employed to overcome them. It paints the Middle Passage experience of his life which took place in the Seventies, a time in the life of Jamaica’s development that he dissected evenly between Jamaica and North America. It is a tale of journalistic development and political turmoil amidst a virtual civil war with gun crime, political murders and international intrigue, all seen and conveyed through the watchful eyes of the reporter. It is also the story of his interventions for his community through diplomacy, journalism and voluntary organisations, all sustained by his uncomplicated faith in God. 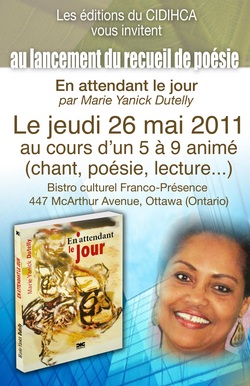 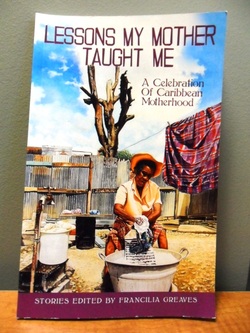 "Lessons My mother taught me-a Celebration of Caribbean Motherhood'.
Editor: Francilia Greaves
An anthology of thirty-five short essays contributed by Caribbean persons about their experience of being 'mothered' and the impact this made on them. The book also affords a nostalgic walk down memory lane at a time when attitudes to parenting and societal values were more universal. Price:$25 CDN 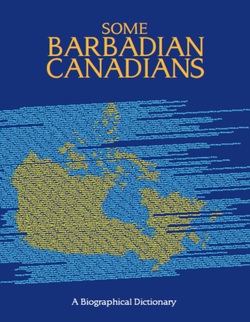 Friday, February 11
6:30 pm - 8:30 pm
Library and Archives Canada (395, Wellington St., Ottawa)
BOOK LAUNCH.“Some Barbadian Canadians. A Biographical Dictionary”,  which presents the biographies of more than 400 Barbadians who immigrated to this country since the nineteenth century and whose energy, creativity and talents have made a significant contribution to every sector of Canadian life and society.
Publisher: The High Commission for Barbados to Canada.
Editor in chief :Dr. K.A.P.Sandiford, Professor Emeritus of History, University of Manitoba.
Price:$35.95 CDN + postage if required
Book available at the Office of the Barbados High Commission in Ottawa  on Wednedays from 11.a.m- 2p.m.
Website: www.BarbadianCanadians.com
More info: e-mail: info@barbadiancanadians.com or phone (613) 236-9517 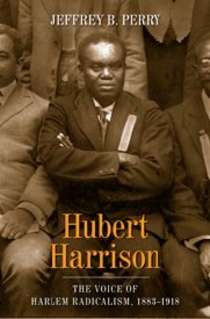 Ever heard of Hubert Harrison?

Born on April 27, 1883 in St. Croix, Danish West Indies, Hubert Henry Harrison emigrated to the U.S. at age 17. Based in Harlem, NY, he became an immensely skilled writer, orator, educator, critic, and political activist who, more than any other political leader of his era, combined class consciousness and anti-white-supremacist race consciousness into a coherent political radicalism. Harrison's ideas profoundly influenced "New Negro" militants, including A. Philip Randolph and Marcus Garvey, and his synthesis of class and race issues is a key unifying link between the two great trends of the Black Liberation Movement: the labor- and civil-rights-based work of Martin Luther King Jr. and the race and nationalist platform associated with Malcolm X. Jeffrey Perry's critically acclaimed biography of Harrison offers profound insights on race, class, religion, immigration, war, democracy, and social change in America. Hbert Harrison He died of appendicitis-related illness in December 1927, at the age of 44. 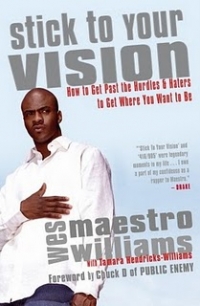 Stick To Your Vision: How To Get Past The Hurdles And Haters To Get Where You Want To Be
by Wes Williams .
McClelland & Stewart | August 3, 2010 | Hardcover

For young adults and people who want help achieving their goals, Wes''s advice based on his life experiences as the "Godfather of Canadian Hip Hop" will guide them on the right path.

As someone who has experienced the highs and lows that come with being a performer, Wes "Maestro" Williams has had to overcome many challenges in his life. These are also the same challenges that we all face on the way to where we want to be, and Wes''s practical and empowering strategies will help you get there. Sometimes these obstacles come from within, whether it''s a fear of failure or low self-esteem. Sometimes they come from your circumstances; perhaps there are people around you who are keeping you down or "in your place," even if they don''t mean to. In Stick to Your Vision, Wes shows you how to define your vision, how to achieve it, and what to do once you''re there. He offers useful tips and advice, as well as inspirational stories and quotes, and exercises that will keep you moving towards your own vision

About the Author
WES "MAESTRO" WILLIAMS is a hip hop artist, inspirational speaker, and actor in movies and television. Wes is an inductee to the Scarborough Walk of Fame, a Gemini-nominated actor, recipient of the 2003 Reel World Film Festival Trailblazer Award and two Juno Awards, and his albums have reached gold and platinum status. Wes''s first album, Symphony in Effect, was the first Canadian rap album to receive platinum certification and made Wes the first hip hop artist to go platinum in Canada. More than 20 years after release, Symphony in Effect remains the best selling Canadian rap album of all time. Wes has performed for former Canadian prime ministers Chretien and Mulroney, as well as royalty such as Queen Elizabeth II. He continues to support several charitable organizations, such as Toronto Plays For Haiti, War Child, Save the Children, Covenant House, Special Olympics, Battered Women''s Support Services, and the African AIDS Society. This is his first book.

Mr Williams' representatives are organizing a book tour and are currently looking for sponsors to assist them in  bringing Maestro's inspirational and motivational lecture to high schools and universities across Canada.

In one of Her Excellency's closing speeches, the former Governor General of Canada, Michaelle Jean, fully endorsed Wes' book calling it "a plan for action".

‘STICK TO YOUR VISION’ and it's three universal principles, EXPECTATION, OPERATION and DESTINATION, have been recommended to be added to the high-school Teacher's Guide in Toronto and has been proposed to be included in the curriculum for Canadian high schools by principals and teachers.

If you are interested in bringing the book tour to your school, please contact:
Shar Thompson, Live Tour Facilitator, LINKBOXLIVE Talent Booking and Touring
linkboxlive@gmail.com
416-747-0677
516-547-3952