Nominate a worthy volunteer for a Community Builder Award

United Way Ottawa honours Ottawa’s outstanding volunteers through its Community Builder Award program — those organizations, partnerships, agencies, neighbourhood groups and individuals who work tirelessly, passionately and collaboratively to make Ottawa a better place in which to live, work and raise a family.

How you can nominate a Community Builder
Nominations are accepted year-round and are reviewed with volunteers prior to the beginning of each year's program. If you think you know a Community Builder, complete a nomination form today.
http://www.unitedwayottawa.ca/English/Take%20Action/Community%20Builders/CBAform.php 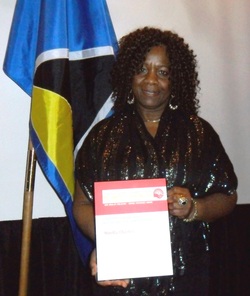 Noella Charles - March 2013
For over 25 years, Noella Charles has been a committed volunteer in
Ottawa, while holding a full-time job and caring for her family. Noella served as the Vice President of United Black Women of Ottawa, and the Vice President of Fête Caribe. She’s been a Fundraising Coordinator at Robert Bateman School and Lead Organizer for the Ottawa Caribbean Associations Love for Haiti fundraiser.
In the past decade, Noella has been both the Vice President and the President for the Saint Lucia Ottawa Association, spearheading several important events. She’s also belonged to various committees over the years, including the Caribbean Association Presidents Committee, the Parents Committee at Hillcrest High School and the SLOA fundraising team, that helped to rebuild St. Jude’s Hospital in Saint Lucia after Hurricane Tomas. She even made the trip to Saint Lucia to meet with the people affected by this natural disaster. 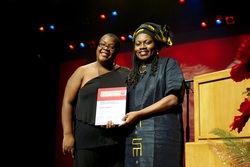 Suzan Lavertu - May 2013
Suzan Lavertu has volunteered countless hours to different causes and
organizations in Ottawa, leaving her positive and impactful mark on whatever she touches. She founded The Cultural Arts Studio School Of Afro-Caribbean Dance eighteen years ago and it’s presence in the city has helped Ottawans gain a deeper appreciation for Afro-Caribbean culture and boost their overall well-being. By engaging people of all ages and skill levels, Suzan has brought the community together in a way that inspires pride and admiration. Suzan has been a City of Ottawa volunteer lead for United Way Ottawa, organized
fundraising events for the Eating Disorders Clinic at the Children's Hospital of Eastern Ontario and volunteered for the Snowsuit Fund, the Ottawa Food Bank and the Eastern Ottawa Resource Center.

Agoro Family - August 2013
In 2002, the Agoro family was faced with a tragedy. In memory of their
son, Dapo, a peace-keeper and a strong believer in non-violent conflict
resolution, they turned that tragedy into a mission: to fight against the rise of youth violence in our community. The Dapo Agoro Foundation for Peace was formed and they have been living true to their mission ever since. Through the Scholarship Award for Peace, awarded to a graduating student at Lester B. Pearson who embodies the same peacekeeping spirit as Dapo, and awareness events they host, the Agoro Family is spreading peace in our community and across Canada. In 2012, in recognition of the difference the Agoro family has made, they received the Ontario Attorney General's Victim Services Award of Distinction. 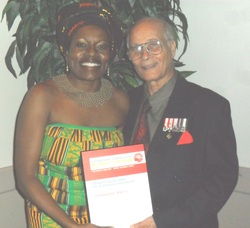 Christopher Harris- October 2013
Christopher Harris is a dedicated and respected community leader who
has been instrumental in addressing many of the racial and cultural problems of the Multicultural community. He helped co-found many organizations, including the Ottawa-Carleton Immigrant Services Organization and the Jamaican Ottawa Community Association, has been a leader on their executive committees and helped develop their programming.  Mr. Harris provides information to the federal, provincial and municipal governments on many issues relating to the treatment of visible minorities, resulting in positive legislative changes. One such issue was policing, where with three others, he formed a citizen's
committee and produced the first study on the hiring of visible minorities and the training of police in Ottawa. He has volunteered with the Ottawa-Carleton police for the past 60 years and the RCMP for 26 years. His dedication to the community has not gone unnoticed as Mr. Harris has received many awards, including the Order of Canada, the Order of Ontario, a Canada’s Citizenship Award, and The Queen Elizabeth Diamond Jubilee. 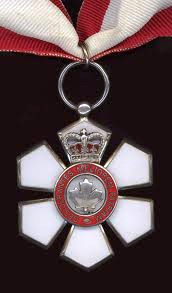 The Order of Canada was created in 1967, during Canada’s centennial year, to recognize a lifetime of outstanding achievement, dedication to the community and service to the nation. Since its creation, more than 5 000 people from all sectors of society have been invested into the Order.

More info on the Order of Canada
http://archive.gg.ca/honours/nat-ord/oc/index_e.asp 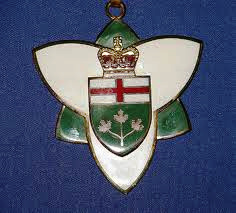 Created in 1986, the Order of Ontario, the province's highest official honour, recognizes the highest level of individual excellence and achievement in any field. Nominations are made by members of the public. The deadline for 2012 nominations is March 16, 2012.

Who can receive this honour?

Anyone who lives in Ontario, or lived in Ontario for a long period of time, is eligible to be nominated. Nominees do not need to be Canadian citizens. Nominees can include:

•Couples or family members who have worked together
•People of any age, including youth
•People in public life – such as elected federal, provincial or municipal leaders – after they have left public office

Anyone can make a nomination. Nominees must be living at the time of nomination. If your nominee’s achievement is in community service, you may also wish to consider a nomination for:

A new commemorative medal was created to mark the 2012 celebrations of the 60th anniversary of Her Majesty Queen Elizabeth II’s accession to the Throne. The Queen Elizabeth II Diamond Jubilee Medal is a tangible way for Canada to honour Her Majesty for her service to this country. At the same time, it serves to honour significant contributions and achievements by Canadians. During the year of celebrations, 60 000 deserving Canadians will be recognized. The inaugural presentation ceremony of the Diamond Jubilee Medal will take place in February 2012.

The Chancellery of Honours, as part of the Office of the Secretary to the Governor General, administers the Queen Elizabeth II Diamond Jubilee Medal program.

Description of the medal
The obverse depicts a crowned image of the Sovereign, in whose name the medal is bestowed. The reverse marks the sixtieth, or diamond, anniversary of the accession to the Throne of Her Majesty Queen Elizabeth II. The anniversary is expressed by the central diamond shape, by the background composed of a pattern of diamonds, and by the two dates. The Royal Cypher consists of the Royal Crown above the letters EIIR (i.e., Elizabeth II Regina, the latter word meaning Queen in Latin). The maple leaves refer to Canada, while the motto VIVAT REGINA means “Long live The Queen!”

The ribbon uses a new arrangement of the blue, red and white colours found in the 1953 Coronation Medal, the 1977 Silver Jubilee Medal, and the 2002 Golden Jubilee Medal. 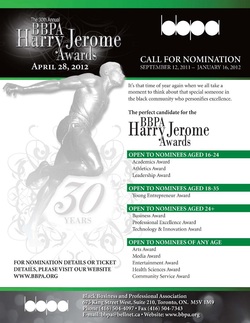 Presented by the Black Business and Professional Association, the BBPA Harry Jerome Awards celebrate outstanding achievements within the African-Canadian Community. It is the most presitigious event of its kind in Canada.

The awards are named after the late Harry Jerome, an outstanding sprinter who set several track-and-field records during the 1960's and represented Canada in the Olympics, Pan-American Games and Commonwealth Games.

Call for nominations for 2012 awards: