Tributes and memories of a precious friend, community stalwart and irreplaceable mentor 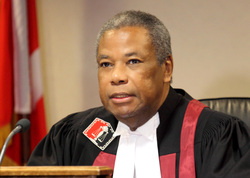 DENNISON, John, G.  (June  22, 1947 - January 14, 2014)
John  attended the Queen’s College of Guyana.
He held a Bachelor’s degree in Economics from Laurentian University in
Sudbury, and a Master’s degree in Political Science from Carleton
University. John was the first black person appointed as Citizenship Judge for Ottawa on June 4, 2012.  He had over 25 years of experience
working on multiculturalism related issues in the Government of Canada, including at Citizenship and Immigration and Canadian Heritage. He was the Founding Chairman of Cathedral Arts, the performing and visual arts programme of Christ Church Cathedral in Ottawa. He has served on the Ottawa Public Library Board Foundation and volunteered with a number of community organizations in Ottawa.

John has been the recipient of a number of awards including the Queen Elizabeth II Diamond Jubilee Award Medal; Lignum Vitae Award from the National Institute of Jamaican Canadians for outstanding leadership in the Ottawa community; Community Builder Award, from United Way of Ottawa, for contributing to the engagement of the Black community in the arts in Ottawa; and, Award of Excellence, from the North American Black Historical Museum and Society Inc., for exceptional contribution to improving awareness and appreciation of Black Canadian Heritage.

He is survived by his sisters: June, Joye and Vivienne;  brothers Courtney and Kenneth; only niece, Carol;
nephews Richard, Charles, Ronald, and Mark and a number of great nieces and great nephews and Godchildren.

A generous mentor, a genuine and trusted confidant-advisor, an outstanding role model 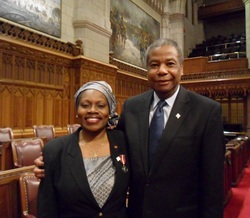 The shock is complete. The loss, unbearable. The impact, profound. The legacy, incomparable. Much of what I have accomplished as a black history promoter-activist and community advocate has been actively encouraged by you. You were always that first phone call before and after a big event, always ready for a pep talk to pull me out of a rut or a particularly disappointing experience. You have been my "gold standard" in community work. There will never ever be another like you. May those of us who are left to carry on the work be worthy of the very high standard of excellence you set in all your endeavours. Walk good, sir. Walk good.

John Dennison was a very proud Canadian who loved his adopted country deeply. He imparted this passion for Canada in every ceremony he officiated as citizenship judge.

John Dennison was very much a pan-Caribbean and pan-African renaissance man who moved easily and gracefully in diverse social circles....

John Dennison showed true patriot love for our Canadian veterans, as evidenced by the spectacular "Remembrance & Commemoration" events he masterminded at Christ Church Cathedral and his initiatives in support of the Perley Rideau Veterans' home. John truly respected the service and sacrifice of our men and women in uniform, and never missed an opportunity to showcase and honour them. How can we ever
forget that incredible evening celebrating the 95th anniversary of the No. 2 Construction Battalion! John was extremely proud of our black achievers in every field.

John Dennison was, and always will be, an original.

A dear and good friend, a champion of the arts... 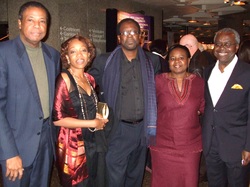 A heavy cloud of sadness has descended on our Community. John's passing is indeed a great loss to all of us.

John was a good and dear friend. The ultimate gentleman. Always polite, gentle with impeccable manners. Never without a smile, he smiled easily and often, and was always ready to lend a helping hand.

His contribution to Canadian Society -- he was a Citizenship Judge, and his unending efforts to raise the profile of our Ottawa Black Community was legendary.

The Cathedral Arts programme he spearheaded and organized over many years, became the talk of the town. He did it with class, and the level of excellence -- as only John could, was unmatched. Each event was carefully planned and executed to perfection. John's love of classical music was infectious.

John enjoyed a good conversation and I shall miss the numerous lengthy conversations we indulged in over the years, especially about the arts, music, culture and politics. He was a first class renaissance man.

This is indeed an untimely passing, but It is what it is, and God knows best. But we have lost a good man. A great man. A man who loved and cared about people. A man who  lived excellence and achieved so much and gave so much of himself.  John's legacy was not the pursuit of perfection. He pursued excellence. His
absence will be deeply felt.

May he rest in perfect peace.

An avid promoter of the culture and accomplishments of his people... 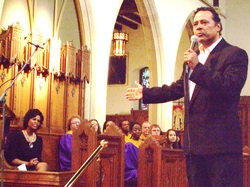 (...) John was a true hero. He was a man of integrity who fought the good fight. He was proud of his heritage and dedicated in promoting the culture and accomplishments of his people. I have known John for more than 16 years and during that time we have spent so many great moments together. We travelled across the country and he always kept me amused with his great sense of humour and his kindness. (...) Let us be thankful that we both had the opportunity to know John and to share some memorable times with him while he was here.

A Builder of bridges across borders, a kindred spirit... 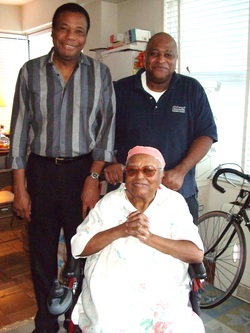 My sincere condolences and those of my mom are with you
and all who were touched by John Dennison’s numerous and tremendous deeds and his kindness.

Thanks for your note of reflection. Mom and I were also taken aback at the tragic news. I echo John’s values, virtues and strengths you
described, including his kindness, ready wit and humour. He was: a distinguished public servant and a great Canadian; a giant in his field; a champion for the preservation and commemoration of Black History and Culture in North America; a brother and a kindred spirit.

Vincent deForest told me of John’s outstanding work on a USA-Canada Underground Railroad (UGRR) Study Tour in the 1990s (John helped to
set up the Canadian side of the tour). John contributed greatly to various events for which I was the coordinator: the Association for the Study of African American Life and History (ASALH) 2006 National Convention sessions on Black Canadian Studies where he was a superb presenter with David Divine; 2010 Canada-USA Black Studies Film Festival at the Library and Archives Canada to which you, Sarah and David Divine also contributed greatly. John asked me, “Peter, what other major conferences should I attend.” We enjoyed the 2008 Association of African American Museums Conference in Chicago. And he and Sarah
enriched a few recent Congressional Black Caucus Conferences here in Washington during which they also visited mom and I was able to give both Washington, DC Black History tours. (...) John did untiring and exceptional work within and outside the Government of Canada to build bridges between Black History and Culture in Canada and the USA.

This is a tragic loss. John was a distinguished public servant, a great Canadian, a brother and a kindred
spirit.