All events will take place on the University of Ottawa campus!!

FESTIVAL PASSES: $45 (gives you access to every event at the festival)

INDIVIDUAL TICKETS FOR THE ALL-STAR PERFORMANCE SHOWCASE AND FINALS NIGHT ALSO AVAILABLE. FOR THE PRELIMINARY SLAMS, YOU PAY AT THE DOOR. TICKETS GO ON SALE SOON. 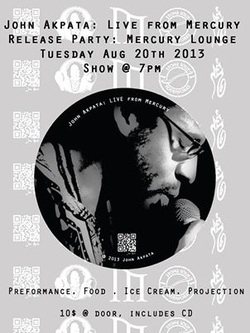 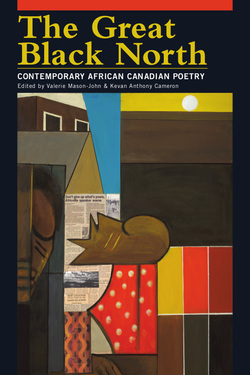 The Great Black North: Contemporary African Canadian
Poetry is the first national anthology to focus solely on poetry by
African Canadians. It is set to publish in February, 2013.
The Great Black North is a contemporary remix of the story of
Black Canada. Told through the intertwining tapestry of poetic forms
found on the page and stage, The Great Black North presents
some missing pieces of the jigsaw puzzle that help fit together a
poetic picture of the Black Canadian experience.
Many African Canadians know their history in North America since
the 17th century. However, the rest of the world may be unaware of the history of enslaved Africans and slave auctions north of the 49th parallel, as well as the free Blacks, Loyalists and Maroons who made their journeys to the “promised land” of Canada. The Great Black North should be a valuable resource for the preservation of
culture that is written and/or performed as dub poetry, spoken word and slam.  At the heart of this book is a poetic blend of literary and oral traditions that recognizes the past and present as they form a tangible
foundation for future generations of poets. This collection of over 90 poets documents the many styles that
Black Canadians use to express themselves. The rhythms felt in The Great Black North stem from the vibrant
pulse of poets such as the much translated and internationally honoured  Africadian George Elliott Clarke who has just been appointed Toronto’s fourth Poet Laureate; Ian Keteku, who was crowned the 2010 World Poetry
Slam champion; Lillian Allen, founder of the dub poetry tradition in Canada; and Afua Cooper, who brought to light the hanging of an enslaved African woman, Marie Joseph Angélique, for the alleged burning of Montreal in 1734. Olive Senior, Frederick Ward, Lorna Goodison, Tanya Evanson, Pamela Mordecai and Harold Head are just a few of the many other poets in the anthology

Sunday, February 24th, 2013
7:00pm - 10:00pm
Ottawa Little Theatre - 400, King Edward Ave., Ottawa
WORDS OF A POET- Vol.IV. Tickets: $15 in Advance | $20 at the door
Since 2008, Words of A Poet has not only showcased some of Ottawa's finest poetic talents but also introduced many internationally acclaimed artists such as Shihan, Black Ice, Amir Sulaiman, Alysia harris, and B.Yung.
This show has a long history of unique artistic brilliance and always looks to maintain this standard of the highest quality. 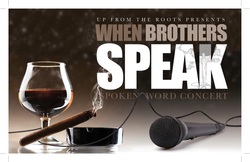 When Sisters Speak 2012 lands in Ottawa on January 22nd! 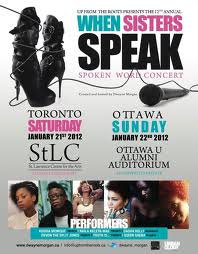 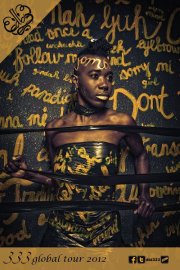 Friday, December 9
6:30pm/ Show will start @ 7:17pm
Rm 282, Unicentre, Carleton University
POETRY: Urban Legends Slam feat. D'bi Young Anitafrika. Urban Legends continues its storytelling with a special December edition of the slam! We've had an exciting first half of the season but now its time to turn up the voltage. The world continues her cries, so we must continue ours by welcoming a D...'bi Young Anitafrika to the Urban Legends Community! The incredible D'bi Young Anitafrika is more than just a poet, she is a life force. This Jamaican-born via Canada-raised dub.poet.actor.playwright.singer and all around revolutionary comes from a lineage of storytellers. Being the daughter of one of Jamaica's first dub poets, Anita Stewart, she was raised and influenced by legends such as Mikey Smith, Oku Onoura, Jean Binta Breeze and Linton Kwesi Johnson. She carries a mountain of work behind her, most recently her new album entitled 333, is a cross-continental collaboration with tanzanian producer Jakofire Pro and South African producers Mandiemafu and Baski Njovu. It is a love letter to all the dancehall queens, queers and questioners of the status quo. D'bi, to say the least, is a universal warrior for social transformation through personal revolution. Check her out: http://dbi333.com/ $7 @ door.  12 slam spots. 4 open mics. $100 to the winner.

Private Pain in Public Pews takes the stage in Ottawa on October 15th! 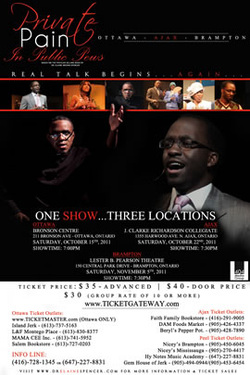 Saturday, October 15
Bronson Centre - 211 Bronson Ave, Ottawa
7 pm showtime
PLAY: Private Pain In Public Pews, by Dr. Elaine Brown Spencer. The play deals with church secrets and the private lives that hold them. It’s no secret the Christian church has been experiencing a period of turbulence. From the Pulpit to the Pew, leaders and laypersons are falling from their pedestals one after the next with scandals of infidelity, double lives and money obsessions. But the real secrets are embedded in the stories of pain behind these scandals.... TICKET INFO: $30 group rate of 10 or more, $35 advanced - $40 door price. Order tickets online at www.ticketgateway.com or call 416 728-1345 for ticket info. More info at Dr. Spencer's website: http://www.drelainespencer.com/Books/The-Play/The-PLAY-Private-Pain-In-Public-Pews.html 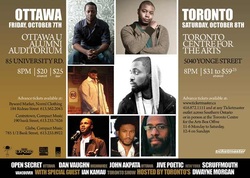 More info about Upfromtheroots and Dwayne Morgan at: 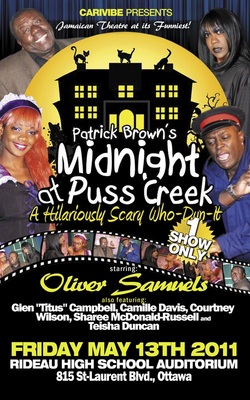 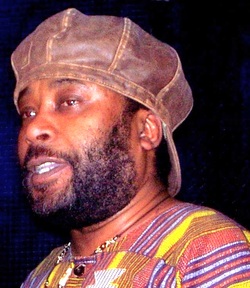 Friday, March 25
7:00pm - 10:00pm
Mercury Lounge, 56 Byward Market, Ottawa, ON
Once Upon A Slam feat. dub poet Klyde Broox. It is time for the March edition of Ottawa's story slam series Once Upon A Slam and we have the amazing Klyde Broox coming up from Hamilton to show us what dub storytelling is all about. Hosted by Greg "Ritallin" Frankson. Got a story to tell? Sign up for the slam and you get 5 minutes to TELL it (and we mean tell, not read). Judges randomly chosen from the audience will score each story and the highest score wins all the marbles.... After the slam, Klyde Broox will give us a full-hour feature set of poetry, story, rhythm and song. Doors and sign up for the slam start at 7 and the show starts at 7:30. Cover $7, free for slammers.

Internationally respected dub poet Klyde Broox (a.k.a. Durm-I) has decades of performance experience in North America, Europe and the Caribbean. A consummate stage artist, he blends speech, song, dance and mime into a powerful package that is inspirational, entertaining and intellectually provocative.

Born in Jamaica, in 1957, Klyde Broox left high school in 1976 for teaching and performing as a poet. In 1978, he won the Nathan Brissett poetry competition at Mico Teachers’ College, with the poem “Ode To The Bamboo.” By 1980, Clyde Brooks was a recognized regular on the burgeoning Jamaican poetry performance scene.

Nine years later Klyde Broox (as Durm-I) had become one of Jamaica's most promising dub poets. He travelled to England and the United States to do readings, workshops and guest lectures. A self-published chapbook, "Poemstorm," was released in 1989 and launched in Swansea, Wales. A second launch in Jamaica, later that same year, drew hundreds.

In 1992, Klyde Broox received a James Michener Fellowship to the University of Miami's Caribbean Writers' Summer Institute. A scholarship followed in 1993. During his Miami sojourn, Broox was identified by George Lamming as one of the most impressive poets emerging from the Caribbean.

Migrating to Canada in 1993, Klyde Broox established himself as an influential literary entity in the city of Hamilton. In 2004, he was nominated for a John C. Holland award for community service. Klyde Broox currently hosts PoeMagic, a popular performance-oriented open-mic series, in Hamilton, Ontario, where he lives with his family. 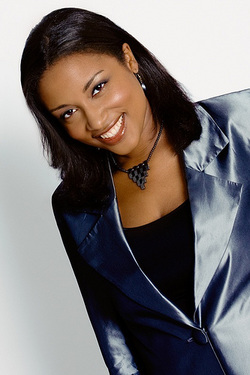 Saturday, March 19
6:30pm - 9:30pm
The Mercury Lounge (56 Byward St., Byward Market), Ottawa
Capital Slam feat. SHAUNTAY GRANT! Shauntay Grant is a writer, spoken word performer, broadcast journalist and musician. She has shared her blend of poetry and music internationally at festivals and events, most recently the Vancouver International Writers' Festival (Vancouver, October 2010), the Canadian Festival of Spoken Word (Ottawa, October 2010), the Atlantic Jazz Festival (Halifax, July 2010), and the10th Anniversary Launch of the Freedom Schooner Amistad (Havana, Cuba, March 2010). As Halifax’s third Poet Laureate (2009-2010) Shauntay organized Canada’s first national gathering of Canadian Poets Laureate. Her own original works of poetry and music have been featured nationally on radio and television, and in several publications. Her first children's book, called Up Home, won her a 2009 Atlantic Book Award for Best Atlantic Published Book. Shauntay was a Poet of Honour at the 2010 Canadian Festival of Spoken Word in Ottawa. She is the host of All The Best, a music program that airs weekly on CBC Radio One in the Maritimes. $7 at the door, free for performers. All ages are welcome.


Monday, March 21
5:30pm - 9:00pm
Ottawa Public Library Main Branch Auditorium (120 Metcalfe St. at Laurier Ave. W.)
Ottawa Youth Poetry Slam March Edition feat. Shauntay Grant. Come on down to check out our next incredible slam event with the amazing Shauntay Grant from Halifax! Slammers aged 20 and under will have a one-hour "rap session" workshop followed by the slam. If you want to participate, bring 2 poems 3 minutes long or less, and bring it to the stage! Rap Session Workshop 5:30 pm; Slam 6:30 pm *Priority on the slam list given to workshop participants and to those who did not slam last month*

Back for the 2nd year in a row; Ottawa, prepare yourselves for another stellar When Brothers Speak show! When Brothers Speak is the largest annual event of its kind in North America, and this year we will continue that trend, as we offer up performances from: 2010 World Poetry Slam Champion, Ottawa's Ian Keteku, Buffalo's Ntare Ali Gault, Ottawa's Poetic Speed, Cali's Andrew Tyree, Ottawa's Ritallin, and Buffalo's Q-Boogie, all hosted by the award-winning Dwayne Morgan!

When Brothers Speak Ottawa 2009...What you missed!!
All photos taken by Sarah Onyango in November 2009 at the Ottawa Little Theatre 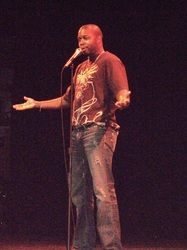 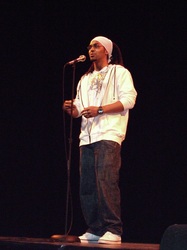 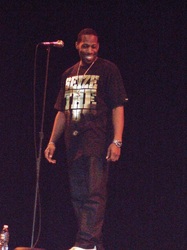 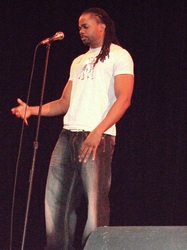 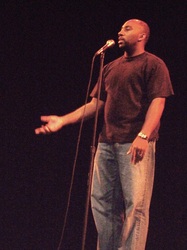 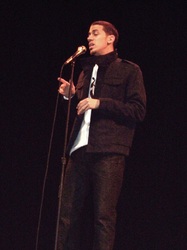