COMMEMORATING THE INTERNATIONALIZATION OF AUGUST 1ST AS EMANCIPATION DAY!!!!

The OBHS is pleased to announce our series of events to celebrate the
beginning of freedom for Canadians of African origin since 1834 and the reason for the spontaneous expression of joy, Caribana*!!!!

August 1st, 1834 became known as Emancipation Day since this was the date when the British Imperial Act came into effect in Canada and other parts of the world– the first global freedom act.  However, it was
delayed, by a graduated freedom system in places like Jamaica, until 1838.

Emancipation Day was celebrated in Canada since 1834; some of those celebrations have continued to this day (Owen Sound picnic).  In other cases, restrictions or declining communities brought about an end of the
celebrations (i.e. Port Dalhousie’s “Big Picnic” & Windsor).

The OBHS is delighted to celebrate the annual contemporary celebration of the Internationalization of August
1st as Emancipation Day as advocated by the Caribbean Historical Society with the OBHS in 1996.  The OBHS is
truly happy to see the success of their advocacy, supported by all Provincial parties, to have August 1st commemorated across Ontario through the passage of Bill 111! (pending nationally) With this recent resurgence in observing Emancipation Day by the OBHS, celebrations have returned to Windsor and to Toronto.

2013 marks 180 years since the Slavery Abolition Act of 1833 was enacted to end slavery
throughout the British Empire, culminating in a fascinating and enduring celebration. As part of a unique workshop series on strategies for teaching Black history in elementary and secondary grades, Black history curriculum specialist, educator, author, and historian Natasha Henry will be offering a practical workshop aimed to help educators incorporate the history of this dynamic African Canadian cultural tradition into the curriculum. 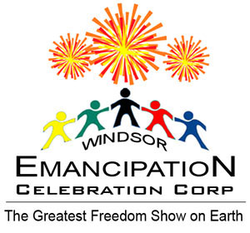 Windsor's Emancipation Celebration is a community festival that invites people of all ethnicities to join us as we celebrate Emancipation Day. Enjoy live music, shows, delicious food, pageant, conference and a parade made up of vibrant costumes and colourful masqueraders. So come and enjoy all of the heritage, beauty and culture Windsor has to offer especially during this annual four day festive commemoration of The Emancipation Act of 1833 that made Canada the final stop on the Underground Railroad to Freedom.

Uncle Tom’s Cabin Historic Site commemorates the life of Josiah Henson, a former slave, who escaped to Canada via the Underground Railroad. Henson rose to international fame after Harriet Beecher Stowe acknowledged his memoirs as a source for her novel, Uncle Tom’s Cabin. Settling in southwestern Ontario, Henson worked to improve life for the Black community and helped to establish the Dawn Settlement. He would go on to become an internationally recognized abolitionist, preacher and conductor on the Underground Railroad.

A good book about Emancipation Day  in Canada 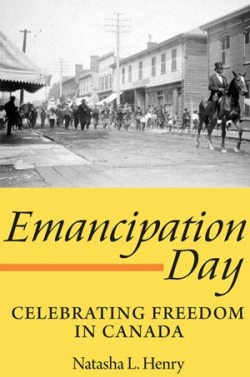 August 1st, 2010 marks the 176th anniversary of Emancipation Day. Emancipation Day celebrations have been a red letter day on the social calendar of Black Ontarians early as 1835. The abolition of the enslavement of Africans in British colonies on August 1, 1834 was commemorated in parts of the Caribbean, the United States, and in villages and large centres in Canada with street processions, speeches, banquets, balls/ parties, musical concerts, and church services. August First has been commemorated in places across Ontario including: Amherstburg, Brantford, Chatham, Collingwood, Dawn, Dresden, Hamilton, Kitchener London, Niagara Falls, Oakville, Oro, Owen Sound, Oxford County, Queen’s Bush,Sandwich, St. Catharines, Toronto and Windsor.

The enactment of the 1793 Anti-slavery Act by Governor John Graves Simcoe recognized Ontario’s (then Upper Canada) leading role as the first British colony to move towards ending African slavery. However, this historical legislation only reduced the number of Africans in bondage through gradual abolition. By 1819 the majority of the remaining Black slaves held in Upper Canada were officially free. Then on August 28, 1833 the passage of An Act for the Abolition of Slavery throughout the British Colonies; for promoting the Industry of the manumitted Slaves; and for compensating the Persons hitherto entitled to the Services of such Slaves (citation 3 & 4 Will IV, c. 73), the Slavery Abolition Act of 1833 for short, liberated several million enslaved Africans in most British colonies, including a small number in Canada on August 1st 1834. Still millions more in colonies such as Jamaica, Guyana, Barbados, and South Africa would have to wait until 1838 to obtain their full freedom. This long awaited day had to be rejoiced by former slaves and abolitionists, both Black and White.

Ontario’s diverse Black population in the 1800s comprised of Canadian-born Africans, some likely the descendants of local slaves, Black Loyalist descendants, and free Blacks and fugitive slaves from the United States. Hundreds of these individuals, out-of-town guests from surrounding towns and nearby American centres, along with Native and White community members celebrated African liberation at various locations in Ontario.

There are many traditional features to Emancipation Day commemorations. Thanksgiving church services were an integral part of Emancipation Day observances. Celebrants attended many different churches: African Methodist Episcopal, British Methodist Episcopal, Baptist, Anglican, and Wesleyan denominations for poignant sermon and speeches, fellowship, and entertainment. Parading was an important public ritual in the 1800s and was a significant component of August First. Marchers led by musical bands walked for miles, publicly displaying colourful banners, emblems, ribbons, flags, and signs. Hundreds of people, Black, White, and Native observers watched the public demonstrations that included a strong military presence with the participation of Black soldiers.

Emancipation Day also provided the opportunity for camaraderie among citizens and visitors. People of different racial, economic, and social backgrounds worshipped together, ate together, partied together, and built important community networks. It was a public arena where the evolving social interaction between races and gender during the Victorian era act became evident.

The first of August observances in emerging urban centres and smaller towns were an opportunity for newly freed slaves to demonstrate their patriotism and allegiance to the British crown and gratitude for freedom. They were also used to mobilize people in the fight to end American slavery and as a platform to bring awareness to the many social and political issues faced by African Canadians well into the twentieth century.

While certain locations witnessed the demise of Emancipation Day by the early 1900s, other sites continued to hold annual festivals, and others still experienced an expansion of participation. It is commemorated today in Owen Sound organized by the Emancipation Festival; in Toronto under the auspices of the Ontario Black History Society; in Dresden at Uncle Tom’s Cabin Historic Site; in Ancaster at Griffin House/ Fieldcote Memorial Park and Museum; in Windsor sponsored by the Windsor Council of Elders and Emancipation Planning Committee with the support of several other community organizations and the City of Windsor; in Oakville in partnership with the Canadian Caribbean Association of Halton and the Oakville Museum at Erchless Estate; and in St. Catharines at the St. Catharines Museum and by local descendants of early Black settlers at a family reunion picnic. Other events held in Toronto such as Caribana, the Irie Music Festival, and Jambana all have roots in Emancipation Day celebrations in the Caribbean islands.

In the push for the legal recognition of Emancipation Day both in Ontario and Canada Bill 111 was passed into law at Queen’s Park in 2008 to officially recognize the first of August as Emancipation Day in Ontario. The Ontario Black History Society lobbied MPP’s and the premier of Ontario to enact acknowledgement of Canada’s history of enslavement and its role as a haven for fugitive American slaves.

Emancipation Day continues to be a remembrance of celebration of the horrific and triumphant experiences and sacrifices of people of African descent and their strength in overcoming insurmountable adversity and challenges in all aspects of life in Canada. It also acknowledges the extensive history and contributions of African- nation-wide and the need to continue the fight for global human rights.

Natasha L. Henry is the Director of Programs and an elementary teacher at a private school in Vaughan. Natasha is also a curriculum consultant and speaker, specializing in the development of learning materials that focus on the African experience. Natasha has developed the educational programs for two innovative exhibits on African Canadian history,...and Still I Rise: A History of African Canadian Workers in Ontario 1900 to Present, and Enslaved Africans in Upper Canada. In 2008 she developed web content and designed supplementary teaching materials for the Committee to Commemorate and Memorialize the Abolition of the Slave Trade (CMAST) for the organization’s education initiative on marking the 200th year anniversary of the end of the Transatlantic Slave Trade.

Today is a rich historical day for Ottawans as we celebrate Colonel By Day, a recognition of Lieutenant-Colonel John By, the British military engineer, best remembered for supervising the construction of the Rideau Canal and, in the process, founding what would become the city of Ottawa.   Today is also Emancipation Day, a celebration of the abolition of slavery in Canada. The Slavery Abolition Act 1833 ended slavery in the British Empire on August 1, 1834 and paved the way for equality and diversity in our country.   We have much to be proud of on this Civic Holiday. From our pioneering traditions of building an engineering marvel and future world heritage site, to our leadership in fostering equality and civil rights in North America.   I hope you take the opportunity to reflect today on the rich history of our community. We are a diverse, compassionate and talented city that has much to offer world. There are many ways to celebrate, so I encourage you to take part in the activities throughout our community.   Have a safe and happy holiday!