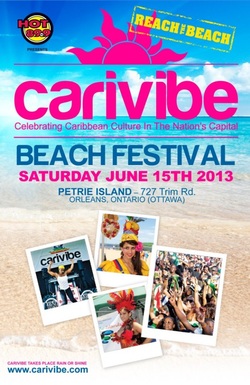 Saturday, June 15, 2013
Petrie Island - 727 Trim Rd., Orleans ON
Carivibe is an annual celebration of Caribbean culture in the Nation’s Capital. It offers a diverse array of tropical rhythm, cuisine, carnival, and culture. Over the years, Carivibe has grown into the largest Caribbean event on the local calendar. 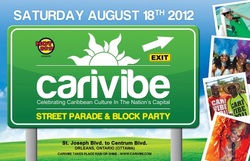 
CARIVIBE 2012 STREET PARADE - OFFICIAL BAND LISTING
WHO ARE YOU JUMPING WITH?? Make your selection and register today!!

JAMAICA 50 OTTAWA CELEBRATION OF JAMAICA’S 50TH YEAR OF INDEPENDENCE presents...
"FEEL THE HEAT AND SOUL OF A NATION"
For info: Rowland Gordon, events@jamaica50ottawa.com, 613.897.2386

WE LiMiN’ 2012
We’re back to blow your mind - Stay Tuned!
For information and opportunities please email info@weliminband.ca
Follow us on Twitter: @weLiMinBand
613.261.5106

Cuba is one of the biggest islands located in the Caribbean, the language spoken is Spanish. Cuban population descends from Spaniards and Africans. All the Cuban’s traditional costumes reflects the mixture of both cultures between Spaniards and Africans. Cuba is well known for the hot tropical weather all year long, very rich in music and dance of Salsa, Rumba , Reggeaton, also famously known for the best Cigars and Rum. We bring you a little Cuban Flavor in this Carivibe 2012.  If you'd like to own your own piece of Cuban Traditional Costume
Contact : Arianne Ramirez
Phone: (613) 301-0645
E-mail: arianne_ramirez88@yahoo.com
Website to keep you informed about the latest Cuban Event in Ottawa: http://www.laperlacubana.com/

In celebration of Trinidad & Tobago 50th Independence Anniversary Trinidad & Tobago Association Of Ottawa
Invites you to participate in the Mas Band “TRINBAGOLD” For Carivibe street parade Saturday, August 18th 2012. This presentation represents a short visual history of this beautiful twin island nation, from slavery to independence, a melting pot of races. Known as the land of Steel Band, Calypso and Carnival which is one of the greatest shows on earth.
Sections: #1 African <> #2 Indian <> #3 Fancy Sailor #4 Blue Caribbean Sea & #5 Bacchanal: Various Individual Costumes
Something for everyone: Kids & Adults
True Trini Culture <> All Welcome
Info: Keith: 613-435-3464 - keithanatol@yahoo.com
David: 613-739-0070 - dlovebos@yahoo.com
E-mail: info@ttao.ca 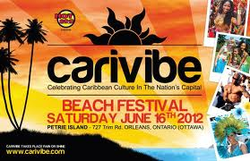 The all new and improved Carivibe Festival
OTTAWA - Ottawa residents can now celebrate Caribbean culture at the beginning and end of the summer. Orleans is bringing the Caribbean to you, not once - but twice! On Saturday June 16th, kick off your summer at the Carivibe Beach Festival and end your summer on Saturday August 18th at the Carivibe Street Parade & Block Party.
Thousands of Ottawa residents will be able to join their friends and families from all over the City, Province and Country at Petrie Island for the 3rd annual Carivibe Beach Festival on Saturday June 16th. This annual event is a celebration of Caribbean culture in the Nation’s Capital, as well as the official launch of Canada’s carnival season.
The Carivibe Beach Festival has become a staple in Ottawa allowing residents to bask in the Caribbean experience. On the beach, patrons will enjoy non-stop entertainment such as Calypso, Soca, Steelband Rhythms, Reggae and Latin vibes from the world’s best entertainers.
There will be an array of classic Caribbean cuisine and beverages available for patrons to satisfy their appetite as well as a showcase of what’s to come at the Carivibe Street Parade in August. Arts, crafts, cultural clothing and accessories from different islands will also be on
display from members of Canada’s artistic community.
Featured, will be two sound stages, a licensed tent for adults, an all-ages section for teens and a kiddies carnival area for children filled with bouncy rides, games and inflatables brought to you by “Circus Delights”.

The Carivibe Beach Festival has also become a meeting place for the organizers of Canada’s major Caribbean festivals. To end the summer festivals, the Carivibe Street Parade & Block Party will now take place on the 3rd Saturday in August.
On Saturday August 18th, join colorful Carivibe Masqueraders, thousands of Orleans residents and visitors as they “Jump, Wine and Chip” down St. Joseph Blvd. to sweet tropical rhythms. After the Carivibe Street Parade join in the fun on Centrum Blvd. and Shenkman Arts Centre for Ottawa’s BIGGEST indoor-outdoor Caribbean Block Party with entertainment for the whole family.
Save the dates, invite your friends and experience the vibe of Ottawa’s largest Caribbean Celebration!
Carivibe 2012 is now accepting sponsors, volunteers, vendors, bands and entertainers.
For more information: (613) 590-1588 info@carivibe.com www.carivibe.com
If you're interested in putting a band on the road for the Carivibe Street Parade, please contact David Mason at 613-590-1588, 613.797.9104 or email  david@carivibe.com

DIRECTIONS: From Ottawa West, Take 417 East to Provincial Route 174 toward Orleans/Rockland, Turn left on Trim Rd. and you have arrived at PETRIE ISLAND – 727 Trim Rd. Go to www.mapquest.com for more detailed directions

Here are 2 easy ways to get to the beach on Saturday June 16th!

OPTION 1 - Park and Ride (Trim Road and Hwy 174
Feel free to park your vehicle at the Park and Ride (location above) and take our shuttle bus provided by OC Transpo straight to the beach. Please note that parking is limited at this location to approximately 600 vehicles; please get there early to secure your spot!

The shuttle bus will be running directly to Petrie Island and back, all day from 12pm to 8pm.

For those of you that would like to take public transportation, the #122 bus route is a quick and convenient way
to get you to the beach. It leaves from Place D'Orleans Mall and travels to the corner of North Service Road and Trim Road, where you can get off and walk to Petrie Island. If you happen to live further down Trim Road, you can also catch
the #122 from the Millenium Station on Trim, limited parking available. It will drop you off at North Service Road and Trim Road, just a few minutes from the beach.

Please note that regular bus route fares do apply for the #122. Acceptable forms of payment are a Student Bus Pass, Adult Bus Pass and bus tickets that you can purchase at the many local OC Transpo bus stations across Ottawa.

TICKETS: $12 CARIVIBE BEACH FESTIVAL TICKETS AVAILABLE NOW WHILE QUANTITIES LAST!!! Children 12 and under are FREE
$12.00 advance tickets available until June 1st. After June 1st tickets will be available for $15.00 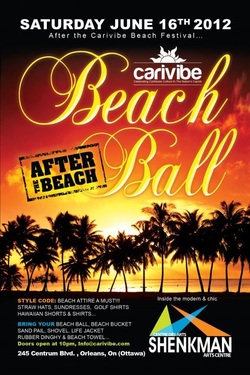 To end the summer festivals, the Carivibe Street Parade & Block Party will take place on the 3rd Saturday in August.

Join colorful Carivibe Masqueraders, thousands of Orleans residents and visitors as they “Jump, Wine and Chip” down St. Joseph Blvd. to sweet tropical rhythms. After the Carivibe Street Parade join in the fun on Centrum Blvd. and Shenkman Arts Centre for Ottawa’s BIGGEST indoor-outdoor Caribbean Block Party with entertainment for the whole family.