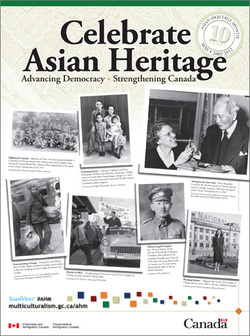 May is Asian Heritage Month. This acknowledges the long and rich history of Asian Canadians and their contributions to Canada. It also provides an opportunity for Canadians across the country to reflect on and celebrate the contributions of Canadians of Asian heritage to the growth and prosperity of Canada.

Canada’s cultural diversity strengthens the country socially, politically and  economically in innumerable ways. Asian Heritage Month is an ideal occasion for all to celebrate the beauty and wisdom of various Asian cultures.

More info and resources at: http://www.cic.gc.ca/english/multiculturalism/asian/index.asp

One War, Two Victories
Opens May 24, 2012 (Thursday) Runs till January 6, 2013
Canadian War Museum (1 Vimy Place)
One War, Two Victories explores the experiences of Chinese Canadians who served in the Canadian
military and volunteer services and in Allied war efforts during the Second World War. Though denied rights and subjected to widespread discrimination before the war, many Chinese Canadians volunteered for military service and
related duties, helping to secure victory abroad and greater equality at home. The exhibition presents fascinating wartime stories of unforgettable men and women, and their remarkable contributions to Canada and to the Chinese Canadian community in war and in peace. The exhibit is organized by the Chinese Canadian Military Museum Society in partnership with the Canadian War Museum.  It was made possible in part through a grant from the Community Historical Recognition Program of Citizenship and Immigration Canada.
Information: (819)776-7000 http://www.warmuseum.ca/event/one-war-two-victories